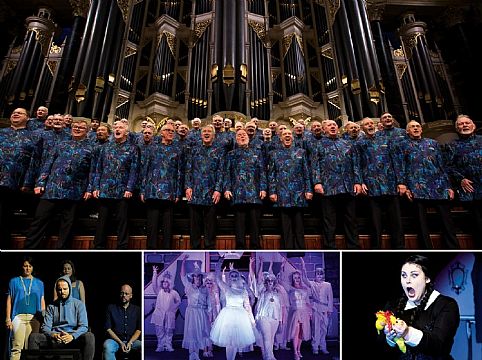 When:
Sun 10 Jul 2022
Time:
2PM
Cost:
$40.00
Booking:
A Must
Facilities:
Public Transport, Toilet on Site, Disabled Facilities
Notes:
Event will continue in wet weather
Details:
Every now and then we are surprised by what people do. Not always in a good way.

But when you put forty blokes in a room with a musical director and a pianist – it’s surprising what can happen. In a good way!

For over 100 years the Sydney Male Choir has been making beautiful music that has enchanted audiences across the decades. With members from all walks of life, this troupe of highly experienced singers delivers soaring harmonies and sheer entertainment that will amaze and delight you.

One striking aspect of these ‘Men Who Sing’ is their versatility and the range of their repertoire. With songs from Billy Joel and Queen, through to Broadway musicals, classics, spirituals and even Sinatra these guys are the ultimate entertainers.

The Choir frequently embarks on regional and interstate tours and later this year will be in Western Australia for a much delayed – but highly anticipated Concert Tour. Under the baton of its very talented Musical Director, Warwick Tyrrell, the Choir has established a new benchmark for entertainment, energy and musical appeal.

Being a frequent visitor to the Central Coast, the Choir is back on Sunday 10 July, with its new show, “Up Close and Personal”. Performing at the Art House – Wyong, the Choir will be joined by your own Wyong Musical Theatre Company.

Since it’s very first 1996 production of the iconic “Guys and Dolls”, staged in the old Wyong Memorial Hall, the WMTC has been captivating its audiences for over 25 years. Over that time, it produced quality theatre experiences that engaged, inspired, challenged and entertained its audiences, and each year, it produces a variety of musicals showcasing the talents of the Central Coast.

Combining the rich sound of an all-male choir with the exuberance and youthfulness of a vibrant musical theatre company, you can be assured of a fantastic musical mystery tour.
Location:
The Art House
19-21 Margaret Street, Wyong
Contact:
The Art House Box Office on
4335 1485
View Profile » Visit Website » Send an Email »

Share Up Close - And Personal: Sydney Male Choir with friends.