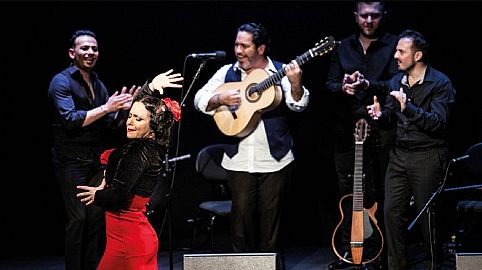 When:
Sat 03 Sep 2022
Time:
8pm - 9:30pm
Cost:
$37-$45
Booking:
A Must
Facilities:
Parking Available, Public Transport, Toilet on Site, Disabled Facilities
Notes:
Event will continue in wet weather
Details:
The virtuoso Spanish flamenco guitarist Paco Lara, who boasts of a distinguished career in Europe and Australia of more than 30 years, launches his album “THE ANDALUSIAN GUITAR“ - featuring some of the finest musicians from Spain and Australia.

Fresh from his packed-out concert at the Sydney Opera House, the maestro himself and his amazing ensemble can assure you that this is an experience not to be missed!

Interpretations of themes from The Andalusian Guitar and some of the greatest guitar classics of all time from composers including Paco de Lucía, John Williams, Joaquín Rodrigo, Chick Corea, will be performed with the characteristic and unmistakeable sound (“toque") of Jerez (Spain).

You will be transported to Southern Spain captivated by the sound of his guitar, flamenco dance and his musicians.

Paco Lara has a toured internationally alongside some of the best artists in Spain. Such as, the Maestro Paco Cepero (one of flamenco’s most legendary guitarists and composers), Mercedes Ruiz (dancer), Isabel Pantoja, etc...

He has also been at the vanguard of Flamenco Fusion with hugely successful groups such as El Barrio and Los Delinquentes.

”The music, beyond being exceptionally well played, is always pretty and eminently approachable – a quality compounded by the choice of repertoire. 8/10 John Shand” (The Sydney Morning Herald).

Apart from his skill as a formidable soloist, Paco is also revered for his ability as an accompanist in the specialised world of flamenco singing (cante); having recorded and performed for years with flamenco’s most significant singers including: Beni de Cádiz, Juan Moneo “El Torta”, El Capullo de Jerez, La Macanita, Remedios Amaya, Jose de los Camarones.