State of Origin Beer Competition at The Entrance Lake House 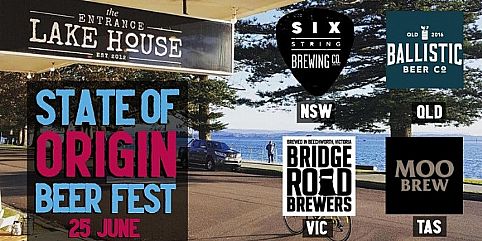 When:
Sat 25 Jun 2022
Time:
12:00 pm – 4:30 pm AEST
Cost:
$25
Details:
State of Origin Beer Competition is a battle between four breweries from four states for your vote. Who will win your vote for the best brewery?
About this event
A battle of the breweries with one brewery from each state: NSW, VIC, QLD & TAS.

We invite you to come to try a range of fantastic beers from four independent craft breweries. Then you pick your favorite beer and the winner of the state of origin beer competition.

Your ticket includes 8 tastings of 100ml, 2 from each brewery.

Breweries will have a wider range of beers for you to buy on the day.

The Entrance Lake House will have a Beer Snack Menu including a range of items off their Smoker on the day from $10.

Brewery Giveaway and Entertainment will be included.

Share State of Origin Beer Competition at The Entrance Lake House with friends.