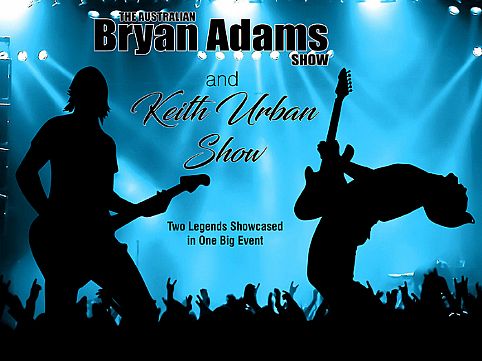 When:
Fri 01 Apr 2022
Time:
8PM
Cost:
$55-$60
Booking:
A Must
Facilities:
Toilet on Site, Disabled Facilities
Notes:
Event will continue in wet weather
Details:
The Australian Bryan Adams and Keith Urban Show provides a full production, high energy rock show, guaranteed to mesmorize even the most die hard fans of the Canadian icon Bryan Adams and Australia’s Keith Urban. It can only be surpassed by the Originals themselves.

Run to you, Somebody, One Night Love Affair, Heaven, Straight From the Heart, Everything I Do, Summer of 69, and so many more hit songs, delivered by an awesome rockin’ band with a lead vocalist so close to Bryan Adams you’ll believe you’re at a real Bryan Adams concert. All the heart pounding rock Anthems and soulful ballads, which made Bryan Adams a true rock Icon are brought together in this fabulous show. Tim is rated in the Top 5 Vocalists in Brisbane and has the voice range to prove it

Craig Woodward is an Australian Singer-Songwriter! Currently working on his follow up album scheduled for release in 2021'. Craig has consistently performed up and down the east coast of Australia for the past 25 years and his passion and commitment to his craft has only grown stronger as he endeavours to reach more local and international fans with his music. In the Keith Urban Set you will hear: Love Somebody, Day's go Bye, One too many, Blue ain't your colour...plus many more...

Craig has supported Australian touring acts the country over sharing the stage with the likes of Ian Moss, Sarah McLeod, Mental as Anything, 1927, The Radiators, Adam Harvey and Hayley Jensen to name a few…

Both Seasoned professionals they will bring the fun and excitement you've come to expect from such iconic superstars!