Kings Of The Keys 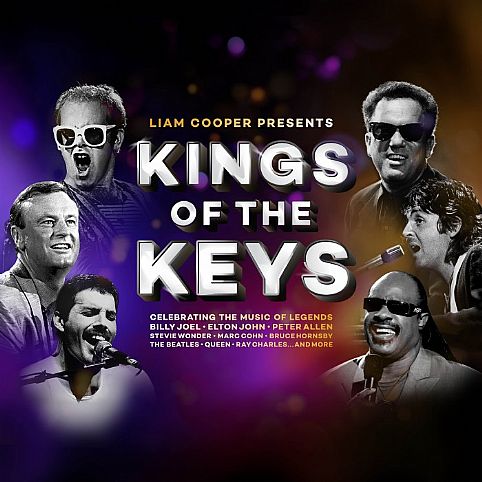 When:
Fri 04 Mar 2022
Time:
8PM
Cost:
$34.95-$59.95
Booking:
A Must
Facilities:
Toilet on Site, Disabled Facilities
Notes:
Event will continue in wet weather
Details:
Kings of the Keys celebrates the timeless music of illustrious rock and roll piano royalty. A celebration of the music, artists and their inspirations in a 2-hour thrilling piano-man performance by vocalist Liam Cooper backed by a killer live band, complete with horn section.

This jam-packed musical spectacular features not only the music of greats Billy Joel and Elton John, but Peter Allen, Stevie Wonder, Marc Cohn, Bruce Hornsby and some of the best piano hits from Queen, The Beatles, Meatloaf, Simon & Garfunkel and more. The show twists and turns through an expertly curated playlist of over 40 classic songs from more than 15 artists.

Kings of the Keys is more than just a tribute show. Known for his vibrant energy and passionate storytelling, Liam explores the meaning and inspiration behind your favourite songs.

Paul McCartney wrote Let It Be after his mother, Mary, visited him in a dream. Bernie Taupin wrote Benny & The Jets as a satire on the 1970s music industry. The “waitress practicing politics” in Billy Joel’s Piano Man as his first wife Elizabeth Weber. Bohemian Rhapsody was Freddie’s coming out anthem.

Liam seamlessly winds stories like these throughout the show and the songs you’ve heard and sung so many times before are given a vibrant new life. It’s as if you get to hear them again for the very first time.

Piano-man Liam Cooper has travelled the world sharing the music of these Kings of the Keys as a featured guest entertainer on cruise ships and his covers of their songs have hundreds of thousands of views online. His energy is infectious and the quality of his performances is exceptional.