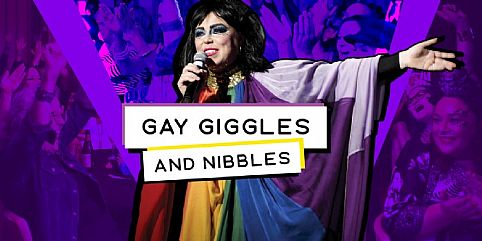 Get ready for some serious belly laughs with Kweens of Comedy with a side serve of yummies as the awesomeness that is Kweens of Comedy hits the Coast with their stand-up and variety showcase.

Mark the end of the festival with the Coastal Twist recovery party as we see ourselves off in a relaxed vibe with a blazing sunset over looking Umina beach. Combine that with a yummy feed, some cheap surf club bevies & DJ Ruby Red keeping the tunes on pointe!

Not to be missed, Kweens of Comedy is a unique comedy showcase that celebrates all types of comedians and all forms of comedy. It’s a space for the entire community to feel welcomed and for all to embrace the hilarious, weird and wonderful beast that is comedy. Hosted by the effervescent AJ Lamarque, (Sydney Comedy Festival, Comedy Store, Best of the Fest shows, The Comedy Lounge, PAXAUS and Comic Con) it’s a show unlike any other!

Supper is curated by Gosford’s own “At Baker Street ” together we #supportlocal so have supper and nibbles with us!

We are a LGBTIQ Brave Space supporting our region to create Safe spaces and there is zero tolerance for anything less than acceptance of all people.