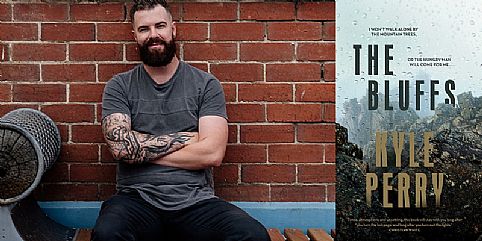 Jump online for an evening with Kyle Perry as he Zooms in from Tasmania! Find out the story behind his debut novel which Christian White describes as 'Tense, atmospheric and unsettling, this book will stay with you long after you turn the last page, and long after you turn out the lights.'

Kyle Perry is a new voice in the Australian mystery and crime genre - fans of Chris Hammer and Jane Harper won't want to miss this one.

I won't walk alone by the mountain trees, or the hungry man will come for me . . .

Reserve Kyle Perry's 'The Bluffs' from your local library.

Kyle Perry is a counsellor who has worked extensively in high schools, youth shelters and drug rehabs. In his work he encounters stories and journeys that would fill a hundred books. Kyle’s mother grew up in the foothills of the Great Western Tiers, in Tasmania’s heartland, where his grandfather was called on for search and rescues in the mountains.

Kyle himself has been lost in Tasmanian mountains twice, and once used ripped pages of a journal stuck on branches to find his way back out. He has also seen strange things in the bush that defy explanation and are best not spoken about. Kyle divides his time between his small country hometown in Tasmania’s North West and Hobart. The Bluffs is his debut novel.

At the bottom of the world, there is an island. It is a land of rugged wilderness, of ice and snow and blistering heat, of the oldest trees on earth . . . They say tigers still roam there. They say other things roam, too.

When a school group of teenage girls goes missing in the remote wilderness of Tasmania’s Great Western Tiers, the people of Limestone Creek are immediately on alert. Three decades ago, five young girls disappeared in the area of those dangerous bluffs, and the legend of ‘the Hungry Man’ still haunts locals to this day.

Now, authorities can determine that the teacher, Eliza Ellis, was knocked unconscious, so someone on the mountain was up to foul play. Jordan Murphy, the local dealer and father of missing student Jasmine, instantly becomes the prime suspect. But Detective Con Badenhorst knows that in a town this size – with corrupt cops, small-town politics, and a teenage YouTube sensation – everyone is hiding something, and bluffing is second nature.

When a body is found, mauled, at the bottom of a cliff, suspicion turns to a wild animal – but that can’t explain why she was discovered barefoot, her shoes at the top of the cliff, laces neatly tied.

Reserve your virtual seat by following the link below.