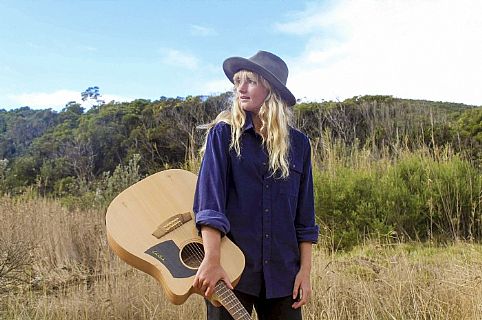 BYO everything or choose from another great selection of meals served by our lovely hard-working kitchen volunteers. Bring a friend, a smile, a blanket, a torch to light your way and treat yourself to what has to be the cheapest and most family friendly night out on the Coast.

Sam Windley is a folk/alternative singer-songwriter from the Central Coast of NSW, Australia. Her guitar-driven, unique sound can be likened to artists such as Phoebe Bridgers and Feist, with a quirky Aussie vibe.

A keen songwriter, Sam is inspired by her love of surfing and the earth, and her honest lyrics open up about life and the human experience with an original, down-to-earth feel. Sam can be seen playing at local haunts, events and festivals, and busking the streets of the Central Coast. She is planning to release her debut EP, recorded by Sydney-based producer Billy Otto, later this year.

Vocals: Helski
Guitar/vocals: Andrew
Helski and Andrew have over 30 years experience performing in numerous bands and other line-ups playing both original music and covers in Sydney and The Central Coast.

Helski, a long term local, has known Andrew for many years so when Andrew became a resident of the Central Coast they set about organising a few jams.The two of them have vast experience in a multitude of styles and genres with a passion for melody and harmonies; so the decision to combine their talents was an easy and natural progression.

This venue is the birthplace of Brackets and Jam on the Central Coast and the community considers it as it's spiritual home. The Mountain itself holds a strong significance for our Aboriginal community and has been a long-standing meeting place for Central Coast people. The rock outcrop situated in front of the kiosk forms a natural pool which is said to have once been a sacred birthing place for women. The Mountain now gives birth to many new beginnings as the hub of creative community arts in the southern Central Coast region.

Additional Information:
FINAL DRUM JAM: Stay late and see the evening out with the spirit of the dance and drum! Enjoy a little more space to dance to the powerful beat of the drum.
Adults $10.
Accompanied children under 16: Free
Meals $7 Plus healthy cakes & soft drinks, coffee, teas and chai