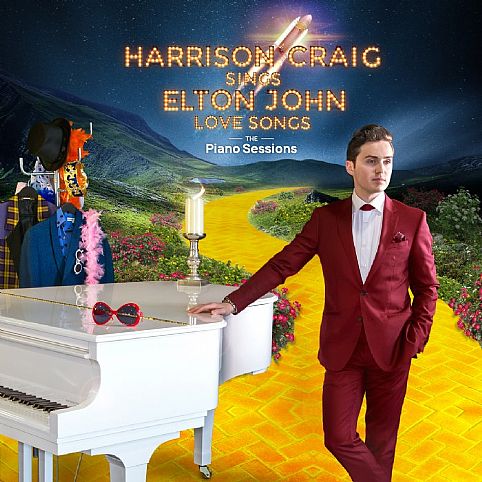 Click to enlarge
When:
Sat 05 Oct 2019
Time:
8:00pm
Cost:
$65.00
Booking:
A Must
Facilities:
Parking Available, Public Transport, Toilet on Site, Disabled Facilities
Notes:
Event will continue in wet weather
Details:
Australia’s Prince of crooning and love ballads, Harrison Craig, returns in 2019 to embark on a national tour honouring the emotional, intimate and soulful love songs of the great, Sir Elton John. After an extensive tour that saw Harrison perform an impressive 54 shows in 2017/2018 supporting his Kings of Vegas album, Harrison has never been more ready to belt out the love songs that were made famous by Sir Elton John and that are featured in the soon to be released musical drama motion picture based on the life of Elton, titled ‘Rocket Man’.

This show will be a delicately curated set of Elton John’s love ballads the likes of “Can You Feel The Love Tonight”, “Candle In The Wind”, “Sacrifice” and more, all performed with Harrison Craig’s trademark rich vocal tones and accompanied by piano.

Add to this a selection of Harrison’s own hits as well as showcasing his brand new original song that will be released later this year titled “Even If You Say So”.

Harrison Craig made his mark as he was crowned The Voice of Australia winning Channel 9’s “The Voice” in 2013 and since then Harrison has been a force to be reckoned with. He has achieved a #1 ARIA and platinum selling album with 2013’s “More Than A Dream” which spawned a sell-out national tour, followed by the release of his #5 ARIA Album with 2014’s “L.O.V.E” which remained in the ARIA Top 10 for six consecutive weeks. In 2016, Harrison indulged in his passion for the gentlemen who at one time or another performed on the glitzy strip of Las Vegas – the likes of Frank Sinatra Nat King Cole, Elvis Presley… to name a few, to inspire his third album “Kings Of Vegas” which also topped the ARIA Album chart.

As an artist, Harrison has had the unique experience of working with the likes of Seal, David Foster, Baz Luhrmann, Diane Warren, Barry Gibb (The Bee Gees) and Australia’s own Olivia Newton-John.

Harrison’s passion for creating a legacy doesn’t stop having written and released his first Children’s Book titled ‘Harrison’s Song’ in 2018 citing that no matter what your vice or hurdle is, you can overcome that. ‘Harrison’s Song’ is now part of Dolly Parton’s Imagination Library – the early literacy initiative bringing free books and education resources to children in disadvantaged communities. So far more than 3500 copies have been sent to Australian families as a means of building vital early literacy skills and ensuring more children can start school ready to learn.

As a United Way Australia Early Learning Ambassador, for which he has represented since 2017, Harrison recently returned from a global philanthropic summit where he performed for the likes of Dr Ban-Ki Moon (8th Secretary-General of the United Nations), along with leaders from governments, the private sector and civil society, who came together in a bid to inspire greater collaboration between public, private and third sectors in creating sustainable global change.

Come Stay The Night... or Two or A Week!