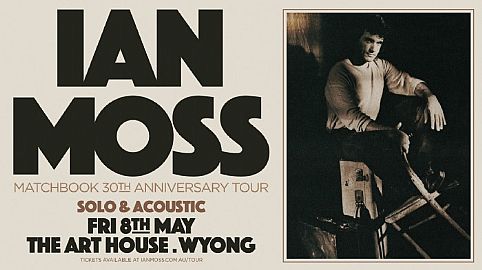 When:
Fri 05 Mar 2021
Time:
8pm
Cost:
63.70
Booking:
A Must
Facilities:
Toilet on Site
Notes:
Event will continue in wet weather
Details:
Hot on the heels of the recent metro Matchbook 30th Anniversary Tour dates, Ian Moss has announced he’ll be taking the iconic album on the road again across Victoria, New South Wales and Tasmania in 2020.

Mossy’s debut solo album Matchbook hit #1 on the ARIA Albums Chart in 1989 and remained in the Top 10 for 14 weeks, selling over 200,000 copies in the first 12 months. He was awarded Album of the Year, Best Male Artist and Breakthrough Artist: Album, Breakthrough Artist: Single and Song of the Year (shared with Don Walker) for Tucker's Daughter, as well as being nominated for Single of the Year.

Ian said, “Touring into the heartland that is regional Australia has always been something that I have looked forward to for over 40 years, especially meeting the fans & hearing their stories. The audiences have always been supportive, and I’m looking forward to getting back out there next year and sharing this special Matchbook 30th anniversary with them”

Fans are reminded to only buy tickets by following the direct ticket links on this page. People who choose to ignore this clear advice and who instead use search engines like Google to find tickets typically get steered to unofficial reselling sites like Viagogo that often lead to rip offs.