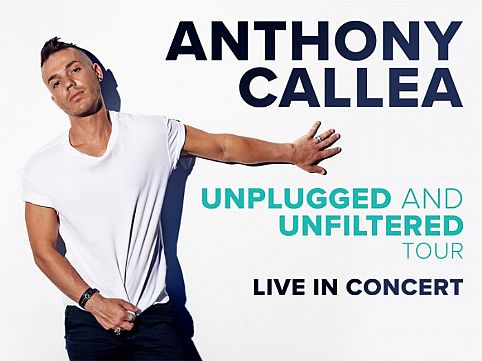 When:
Fri 11 Oct 2019
Time:
8:00pm
Cost:
$69.95
Booking:
A Must
Facilities:
Toilet on Site
Notes:
Event will continue in wet weather
Details:
Join this ARIA Award winner, and one of Australia’s finest voices, for an intimate concert experience: Unplugged & Unfiltered. Audiences will be captivated by Anthony’s extraordinary voice and infectious personality in it’s purest form, when he will be joined on stage by piano, guitar and vocals in an intimate setting, performing songs from his 7 albums and more, as well as sharing stories and experiences from his life in and out of music.

It’s been 15 years since hitting the spotlight, followed by national tours, performing for royalty, touring with the likes of Celine Dion and Whitney Houston, number 1 albums, countless TV appearances,Anthony is still at the top of his game with his undeniable flawless vocals.

His most recent studio album, ARIA Number 1 Hits in Symphony (recorded with the Melbourne Symphony Orchestra), debuting at #1 on the ARIA album charts in 2017. This was Anthony’s third album to enter the charts at #1, and sees him join the elite ranks of Australian music royalty - John Farnham, Jimmy Barnes, Keith Urban and The John Butler Trio - as the only Australian artists to have three or more albums debut at #1 on the national ARIA charts