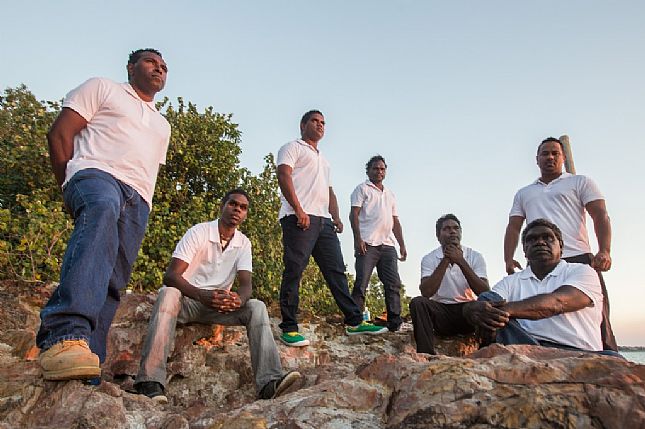 B2M by Duane Preston
Building on their international touring acclaim, Tiwi Island band B2M are now embarking on their first national tour and are coming to The Art House, Wyong on Saturday 8 September for one night only. This seven-piece band will showcase their unique blend of contemporary and traditional sound in a new performance that reveals the full breadth of Tiwi culture and identity!

B2M (standing for Bathurst to Melville) are a seven-piece Indigenous RnB band hailing from the Northern Territory’s Tiwi Islands, 80 kilometres north of Darwin where the Arafura Sea meets the Timor Sea. Formed in late December 2004, B2M are strong Tiwi men who write, sing and perform music that creates conversation across cultural, social and geographical boundaries. They do all of this through thumping rhythms, catchy melodies and an infectious energy which has left audiences all around the world on their feet.

Their show Mamanta – meaning ‘friend’ in Tiwi – presents a unique performance, Tiwi style! Accompanied by their new album, Mamanta will present a map of musical influences and explorations from around the world, while drawing on the rich local history of Tiwi Islands. Incorporating footage and imagery of contemporary Tiwi life, including church practice, football and influences from their art centres, Mamanta is a vibrant cultural experience told through a mix of dance, chants, song and film.

“For us, the message that B2M shares is the most important facet of our music. Steering clear of catchy love-songs, we focus on bigger issues, like drug and alcohol abuse, mental health and understanding identity,” said band member Jeffrey ‘Yello’ Simon.

“Drawing on a strong tapestry of stories, including our own songlines that have never left the Tiwi Islands before, Mamanta is unlike anything ever seen. We have never created a show that shares our experience this fully,” said ‘Yello’. If you’ve never had an opportunity to travel to the Tiwi Islands before, this show is sure to take you on an illuminating cultural journey.

From ancient stories to life today, Mamanta honours the past and celebrates the future.
“Like the paintings that reflect the depiction of country, our songlines demonstrate our journeys, our history and our community,” Yello said.

Directed by Gail Evans and produced by Artback NT and Skinnyfish Music, Mamanta is a rare gift to audiences. A captivating, moving and upbeat work that shares Tiwi history, culture and identity with the nation.

"B2M...wow, the music, the joy, the talent- it was contagious. It would have been a standing ovation that demanded an encore- but everyone was already on their feet dancing! We couldn't get enough of them!" Phaedra Watts, Artistic Director, Nannup Music Festival

"Their songs are infectious, unashamedly sentimental and often inspirational, shot through with the sort of close-knit vocal harmonies that come about through years of touring. B2M's values are solid, decent. Their dances are sexy but clean. You won't find a swear word here. These fellas are well aware of their status as role models to younger generations and as keepers of their communities' identity." The Guardian

Council Delivers 18 New Playspaces with Biggest Coming Soon
Kids across the coast will be squealing with delight with an abundance...

Community to Guide Plans to Revitalise The Entrance Town Centre
Council are calling on the community to dream big and share their idea...

Turning an Unexpected Canvas into a Showcase of Indigenous Art
Residents may have already spotted the first of a series of artworks popping...