Thousands of Tonnes of Rocks Mobilised in Fight Against Coastal Erosion 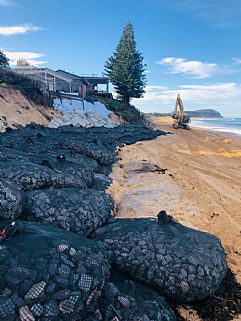 Wamberal - 5 August 2020
Five and half thousand tonnes of rock have been placed on North Entrance and Wamberal Beaches, by Central Coast Council crews, during the recent coastal erosion emergency response.

1,800 tonnes of large basalt rocks have been placed directly on Wamberal Beach with 1,720 tonnes of rock filled bags craned in from Ocean View Drive.

At North Entrance - just over 2,060 tonnes of rock has been placed on the beach there between Karagi Reserve beach access and Hargraves Street beach access since the work began two weeks ago.

"The results speak for themselves and show what is possible when you have the best coastal engineers in Australia working with committed crews, the best material available and the emergency orders needed to get the job done," Mr Murphy said.

"The success of this response will hold us in good stead as we plan further recovery works and a longer-term solution at both locations.

Works are expected to take a further two to three weeks at Wamberal. More four tonne bags will arrive today and Ocean View Drive will need to remain closed until at least Saturday while these works continue. Sand renourishment and rock armour work on the beach will continue for the next few weeks.

At North Entrance large rocks are still being placed on the beach at the toe of the escarpment during low tide with works expected to continue over the next week.

North Entrance and Wamberal beaches remain closed in front of affected properties. Beachgoers are advised to stay away from the work areas for their own safety.

First 'Drive In' Concert for The Coast!
Central Coast Council will present a 'drive in' concert to bring the magic...