The Entrance Library On The Chopping Block 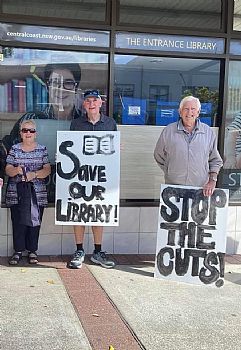 Member for The Entrance, David Mehan is outraged by the news that Central Coast Council are planning to close The Entrance Library.

Not only will the community lose a library, they will be left without all the other Council services that this facility offers to the public. Services such as:-

The Administrator publically stated that he would not be seeking to cut Council services however, if this library shuts its doors that is exactly what will occur.

The community don’t want to see these facilities vanishing. Already, The Entrance Township has suffered with Westpac closing both its branch and removing its ATM, while the Commonwealth Bank are still in limbo on reopening its branch.

The Coast's Best Place for Gelato, Sundaes and Waffles!!