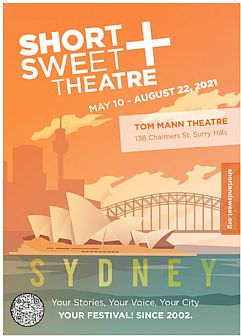 Short+Sweet Sydney returns in 2021 with a brilliant new festival, a heap of exciting initiatives and a massive feast of theatrical talent to tempt any taste!

The “biggest little theatre festival in the world” - celebrating its 20th season! - kicks off on Sunday 16 May with two performances of the special Hindsight 2020 Gala  – the final we desperately missed and now get to see – featuring the best of last year’s Covid-curtailed fest.

There will be one judges’ performance at 2pm, with the Awards* Gala at 6pm – all at the hit international festival’s Sydney home, the newly renovated Tom Mann Auditorium in Surry Hills.

Ten ten-minute plays – from the comic and gripping – that won their respective heats last year, open this year’s bumper festival and there’s a no shortage of drama… and laughs!

Now We Are Ten by Frank Leggett – a veteran writer of 25 Short+Sweet plays – is his first time directing.
With Miranda Michalowski of BROOKLYN as ‘Abigail’ who has decided to save her sister… and to hell with the consequences!

Superposition by Clifford Keen and performed by Andrew Ramage & Lana Jean Hill (Druth Theatre Collective).
“Superposition: what the feck is that?”

The End is Nighy by Frances Bowick, directed by Gina Cohen starring Steven Tait and Edric Hong.
A struggling actor decides to confront his agent about his lack of work.

The Tea Party for Sad People by Cathy Friend of ERINA is directed by Jeremy Lowrencev for Umbr Productions.
“You’re invited to spend a day in misery and despair, wallowing in your acute loneliness amongst friends and rivals alike. Coffee?”
With Zoe Sadler (HORNSBY), Tihana Vulcik, Julia Pennisi of TOUKLEY and Joss Chalmers.

Trapped by Barry Wood (UK), directed by Lachlan McWilliam sees best friends (Gemma-May Bowles and Yvonne Dallman)
come together in an absurd comedy to realise that reality is not all it seems!

Mum's the Word By John & Kay Longhurst, Directed By Steven Tait sees two singles brought together for a blind date
by their well-intentioned mums! Ally O’Brien and Nathan Moss star.

with two weekly programs, each named for an iconic Sydney beach!

Week 2 continues with ‘Coogee’ and ‘Newport’ in the same pattern - and so forth until the semi finals and gala awards finals in August.

The festival’s Diversity & Inclusion committee has been working on broadening the depth and breadth of its already huge artistic community as well as its audience. And the pilot Professional Development program – driven by new festival director Nick Hardcastle – kicks in from July with free labs, workshops and panels covering acting, writing and directing.

There will be masterclasses from guest casting directors and agents, a special class on the arts – in partnership with the Imperfectly Perfect campaign.
This year the inaugural Actor’s Circle - with prizes sponsored by Screenwise, Australia’s leading screen acting school - replaces Best Actor/Actress awards and will recognise five outstanding actors, irrespective of gender identity.

Short+Sweet 2021 Week 1 (Thurs 20 to Sunday 23 May) features the ‘Bondi’ and ‘Manly’ programs.
Bondi (Thur & Sat 7.30pm, Sun 2pm) features I Was Fine Until You Came In The Room by  Rich Orloff, directed by Kym Vaitiekus, in which Helen and Pete remember the day they met… which led to a 50-year marriage.

Dating Through the Decades by Ken Levine, directed by Gina Cohen: A boy and a girl date in every decade from 1950's until today.

Ones and Zeros written and directed by Addison Fowler is an ensemble-accompanied monologue about Casper, a trans non-binary young adult trying to find their place in the world and learning how to love themselves.

Diary of Marilyn written and directed by Debbie Neilson features real Marilyn Monroe quotes,
as the iconic actress questions who she is (in and out of the public light) and if anyone - herself included - has the answers.

Plus The Ratings Game written and directed by Wendy Crew; and The First Edition by John and Kay Longhurst, directed by Steven Tait.

Manly (Friday 7.30pm, Sat 2pm and Sunday 6pm) opens with Twisted Ladder by Pauline Bleach, directed by Gabriela Loza: “The election is won and there are two positions. Who will get them?”

Short+Sweet opens with 2020 Hindsight Gala Sun 16 May 2pm & 6pm, and continues Thu-Sun to Aug 23
All performances at the Tom Mann Auditorium 136 Chalmers Street, Surry Hills
Information and bookings at the Short and Sweet website.

Now We Are Ten