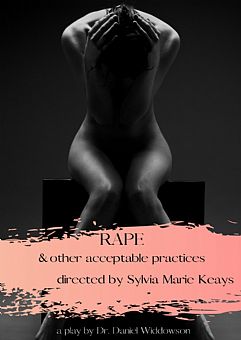 RAPE & OTHER ACCEPTABLE PRACTICES is Widdowson's commentary on unacceptable social problems which Include rape, gaslighting, silencing victims, and victimising perpetrators. The one-act, three person, minimalist production will be playing on the Central Coast, Sydney, and Canberra in May.

The suggested audience age is 15+ The show will be followed by Q & A sessions.

Maddie - Claudia Shnier
Born in Sydney, Claudia was bitten by the acting bug from a very early age, which manifested into an acute and chronic infection. It is the biggest gift she has ever received and has allowed her the absolute joy to play Beatrice in ‘A View From the Bridge’ (dir. Anthony Gooley, (2020), Olivia in ‘Twelfth Night’ (dir. Adam Cook, 2019), Scandal in ‘Love for Love’ (dir. Anthony Skuse, 2019), Phyllis in ‘Central Park West’ (dir. Troy Harrison, 2019), Adolph in ‘The Creditors’ (dir. Sam Trotman, 2019), Andromache in ‘Trojan Women’ (dir. Adam Cook, 2018) and Wendla in ‘Spring Awakening’ (dir. Sarah Carradine, 2018). Claudia cannot wait to enter such an exciting industry that she might actually burst.

Michael - Harry Reid
Harry holds a Bachelor of Communication through UTS and a Bachelor of Performing Arts through the Australian Actor's Centre. He's played Jack in the IMportance of Being Earnest, Willmore in the Rove, Orsino in Twelth Night, Felix in the Normal Heart, and Hansy Rilow in Spring Awakening. He's experienced in theatre, musical theatre, film, television, stage combat, clowning, juggling, jazz, guitar, and drums.

Director - Sylvia Marie Keays
Born in Sydney, Claudia was bitten by the acting bug from a very Theatrically trained at The American Academy of Dramatic Arts Hollywood and AFTRS, Sylvia has worked in theatre, film and TV for the past 15 years in the USA and Australia. Most recently Syl performed in Blind Tasting by Paul Gilchrist. Sylvia has previously performed at The Ensemble Theatre Sydney, Old 505 Theatre Sydney, KXT Sydney, The Street Theatre Canberra and NIDA. Companies have worked with include, Subtlenuance Theatre, Fledgling Theatre Co, SheShakespeare, Shakespeare By The Sea, The Classical Theatre LAB Los Angeles, The Chance Theatre Orange County, and Counter Productions Los Angeles.

“A strong cast, led by Keays, who delivers a clear and strongly felt performance." Jason Blake of Eight Nights A Week"Performed with great vitality and charm by Sylvia Keays." Sydney Morning Herald

Writer - Daniel Widdowson
Daniel is Canberra born, and former presenter for Saturday Disney. He wrote for Home & Away, hosted Ground Force, is an ambassador for the Jane Austen Literacy Foundation, and serves as a judge for the Australian Writer's Guild.

He won Best Screenplay at the New York Movie Awards and Best Director at the Florence Film Awards for hi feature, 'Equivocal Redemption.' He recently starred alongside Poppy Montgomery and Vince Colosimo in prime time American drama Reef Break. He holds a Doctorate in the Creative Arts, Masters in Hermeneutics, and a Bachelor of Theology.