Little Tern - Credit Andrew Robinson
The Entrance looks to be on track for a record baby boom of the feather kind, with positive signs the threatened Little Tern's are having a bumper year.

Monitoring of nesting sites at Karagi Point has revealed 58 nests, with 144 eggs in total, a record since Little Terns starting nesting in the area in 1998.

"We're very lucky to have Little Terns visit us from as far away as Indonesia and South-east Asia every summer," Mr Sulkowski said.

"Unfortunately, due to habitat loss, human disturbance and predators, the Little Tern is an endangered species, so we are thrilled to have observed record numbers of breeding pairs and eggs this season.

"State-wide, numbers of nesting pairs are declining by about 3 percent per year, which makes high-performing nesting sites such as Karagi Point all the more important for the species long-term survival."

Council, in consultation with NSW National Parks and Wildlife Service, have installed temporary fencing and signage around the breeding area to protect the nests and chicks.

"I want to thank the community for being respectful of the nesting sites and urge them to continue to take care and obey the temporary fencing and signage, so that we may get to enjoy these special visitors and their growing families," Mr Sulkowski added. 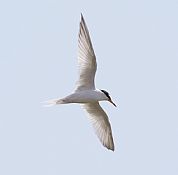 Be a mate to our furry friends in the heat
RSPCA NSW is urging all pet owners to keep their pets cool, hydrated,...

Central Coast Locals Bring the Show Home as the Live Band in Hit Musical Rent
RENT is currently rocking the Sydney Opera House before it journeys up...
More News »