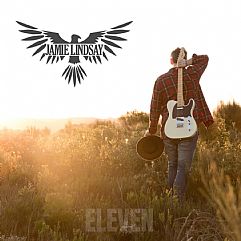 Singer-songwriter Jamie Lindsay couldn’t be happier to mark his return to country music with his album, Eleven.

Eleven is not only a lucky number for Jamie, but is also a landmark album for the artist, as he returns from playing in the pop and rock scene and cements his place in Australian country music with a collection of stellar tracks.

Jamie is no stranger to the Australian country music scene, having been a Star Maker finalist in both 1997 and 1998, but is ready to put in the hard yards to establish himself and work from the ground up, and this hardworking attitude is reflected in his music.

“I make blue collar music because that’s who I am,” he said.

Each of the 11 tracks on Eleven reflect this hardworking attitude that the multi-instrumentalist possesses, and reflect his many musical influences, and he’s keen for each song to make a real connection with his listeners.

Jamie has already released numerous singles from the album, and the current featured track is Sirius, a song about the loss of a loved one, inspired by the death of his German Shepherd, Sirius – named after the dog star.

“The whole song was about the day I had to put him down,” Jamie said.

“The day the vet came around and put him to sleep, I was breaking in two, bawling and it was the most I’ve ever cried, but this song is also broadly about the loss of a loved one, which everyone can relate to.”

These songs haven’t stemmed from situations he’s created in his imagination – Jamie’s songs all come directly from his personal experiences, and he’s lived every one of these stories.

“I just want to connect to people and I want people, if they feel a connection to my music, to let me know – email me or message me – because, if I can connect to one person, that’s success for me,” he said.

“That’s what music is about for me, and I want people to know these songs and I want to build relationships with my listeners. I know this all comes with time and perseverance.”

Eleven was released on September 11 and is available from all digital retailers and Jamie’s website.

First 'Drive In' Concert for The Coast!
Central Coast Council will present a 'drive in' concert to bring the magic...