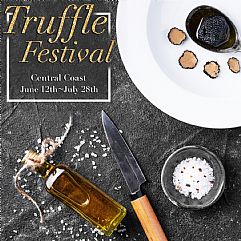 The Central Coast Truffle Festival, June & July 2019, will be competed between three local restaurants plating three black truffle dishes for locals to experience the beauty of truffles from Tasmania.

The three-course degustation by each competing restaurant, can be purchased individually (Entrees $25, Mains $39, Dessert $20) or as a set menu ($69pp or $99pp with matching Hunter Valley wines) from either restaurant between 12th June and 28th July 2019.

The competing restaurants in 2019 are Ocean Restaurant (Blue Bay), The Entrance Lake House (The Entrance) and Cecilia's (Toowoon Bay). The organisers hope to grow the event to include more restaurants next year if they receive the support and interest needed from locals.

Each Head Chef will be competing for the new Truffle Master of the Coast trophy to be handed out on Sunday 28th July at the closing ceremony at The Entrance Lake House.

Locals are encouraged to put on their master chef hats to rate and score each chef's truffle dish. The restaurant and chef with the highest score from the local public will be named Central Coast Truffle Master Winner.

At this stage each Head Chef has been tight lipped on their menus for their restaurant, all saying that their menus will only be revealed on launch day.