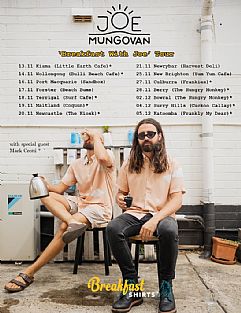 Joe Mungovan has today brought together a fresh and luminescent sound with wistful songwriting, to float his debut album ‘A Flower In The Weeds’ through speakers across the world.

“I recorded the majority of the album in Kangaroo Valley.  I moved out to the bush and turned a small house into my studio.  I would go weeks without seeing any other humans. It provided me with the time and space to reflect on the past years of touring and life. My mate Tim Carr helped me put the final touches on the song and we mixed the album in his bedroom closet.” Joe Mungovan.

Throughout his career, Joe Mungovan has consistently constructed melodies that expand from traditional pop and rock songwriting structures. His songs have been played across Triple j, Double j and community radio, video support across Rage and MTV and press praise in Rolling Stone, Pilerats, Music Feeds, Au Review, The Music to name a few. Mungovan’s songwriting has also seen him nominated for an APRA Award and Golden Guitar Award in 2021, and a Finalist in the International Songwriting Competition in 2020.

To celebrate the release of his debut album, Joe will be performing exclusively & intimately across cafes in NSW for his ‘Breakfast with Joe’ tour.

“I initially planned on touring the album with a full band through November and December. The second lock down hit, I quickly realised that I would have to reschedule those shows, but I still wanted to play some gigs and give people live music. The idea of ‘Breakfast With Joe’ was born. On the week the album drops I will hit the road and travel up the east coast playing at a different cafe each morning. I have chosen some beautiful spaces with big outdoor areas so bring your picnic rug, get your almond latte orders in and enjoy a morning of live music and smashed avo.” Joe Mungovan

Sale of Gosford Administration Building one step closer
Central Coast Council is in talks with the State Government on the sal...

Get ready to reIMAGINE and celebrate the Central Coast
Central Coast Council has a huge two months of events and activities planned...