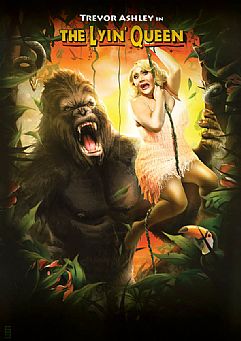 A riotous night of musical comedy, romance, politics, and adults-only parody comes to The Art House in The Lyin’ Queen, the latest extravaganza by the one-and-only Trevor Ashley.

Described as “an eco-illogical disaster movie remake”, The Lyin’ Queen promises ridiculous puppets, song parodies, and a send-up of every movie ever made on or near an island.

Somewhere off the coast of Australia, through the misty waters near Maroochydore, lies an island. A mysterious atoll where it is said beasts of unimaginable terror roam. Legend has it that these monsters have been created - genetically engineered, if you will - by a genius. Well maybe not a genius, but certainly a force of nature.

Yes, Queensland has opened its own version of Jurassic Park, and you’re the first guests.

Parodying everything from The Lion King to CATS, Australian politics to disaster flicks (one and the same really), Home and Away to Wentworth, this extravaganza brings together the many talents of Trevor Ashley. Once described as ‘the busiest man in Australian show-business’, he is an acclaimed writer, musical director, performer, director and producer – not to mention as funny as they come.

This will be the first time a Trevor Ashley show has come to the Central Coast, with his previous shows playing sold out seasons in Sydney, Melbourne and Brisbane and debuting on both “basically Broadway” and London’s West End.

"I am so excited to bring my brand-new show to The Art House Wyong for the first time. It's a spectacularly funny and outrageous show that won't leave a dry seat in the house! You're also getting it FIRST before we go to the Sydney Opera House.” Ashley said.

Perfect for a ladies (or gents!) night out, work Christmas party, or parents-only treat, The Lyin’ Queen is set to take on Wyong this November.

“Guaranteed to offend everyone equally, this topical and risqué revue-style cabaret leaves no sacred cow unpricked.” – The Age