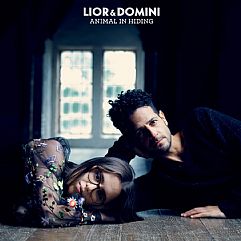 Gifted singer/songwriter Lior, and exciting emerging artist Domini Forster spent Melbourne’s long lockdowns developing songs together over zoom. Now their debut EP Animal in Hiding celebrates these songs live on stage for one night only at The Art House, Wyong.

Reminiscent of iconic folk music of the 60s such as Joni Mitchell, Crosby, Stills & Nash and Simon & Garfunkel, this talented duo has developed a signature sound made of intricate fingerpicked guitar and vocal harmonies. Domini Forster initially toured as Lior’s support act, then as a guest vocalist, and now as a co-writer in a creative partnership built over six years.

Speaking on their collaboration, Lior says “In singing together, Domini and I discover a pair who can weave in and out of each other’s shadow. Somehow, we sense one another’s vocal nuances in real time. It is a rare musical synergy, one we felt compelled to capture in a collaborative project.”

Lior is a multi-ARIA award winner as well as an APRA Screen Award winner for his song-writing work for film and television, earning him much respect in the independent Australian music scene. He has toured extensively both in Australia and internationally at famed events such as WOMAD and Edinburgh Festival, and with prestigious companies including the Austin Symphony Orchestra and the Australian Chamber Orchestra.

The Art House is committed to bringing artists of all genres to the Central Coast and is excited to present Lior and Domini after their previous show was cancelled during lockdown. Since then, Animal in Hiding came to life and explores themes of human connection and disconnection, introspection and the fragility of the world.

Lior and Domini – Animal in Hiding

The Art House wins Wyong Business of the Year and Award for Excellence
Central Coast Council congratulates the management and board at The Ar...