A New Kind of Shakespeare is Coming to Sydney

Daniel Widdowson (Director/Henry) conveys the theological difficulties in England’s ‘Just War’ against the French in the battles of Harfleur and Agincourt. This first-time and one-night-only production is an artwork through which the Sydney College of Divinity is allowing a Doctorate of Performance.

A tale of love, war, peace, loyalty, distrust, arrogance, and grace. A new style of Shakespearean performance for modern day audiences, this is Shakespeare 2.0 designed specifically for the twenty-first century audience. Unrelenting battles scenes, moving dialogue, romance, and tragedy, King Henry V is not to be missed.

This is a single performance of one of Shakespeare’s most valiant plays, which will not be repeated. The set (a backdrop in blood covered scripture) is destroyed through the performance. 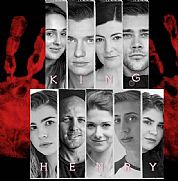