A funny thing happened after the BBQ 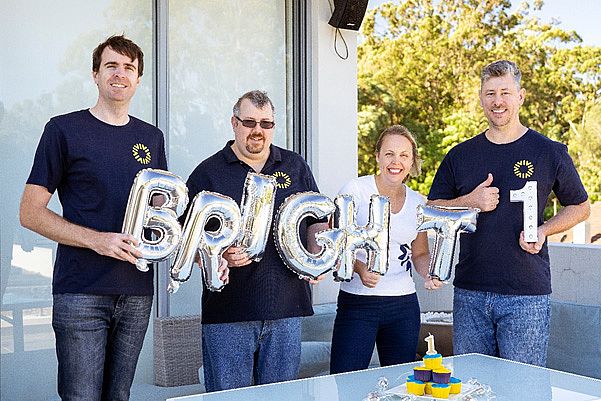 How a rant about poor customer service led to five mates starting their own electricity company… and how you can share in the celebrations.

“We wanted to make electricity easy and put customers first. People need to be rewarded for their loyalty, not punished for it,” – Arran Coughlan, Co-Founder and CEO of Bright Spark Power

Bright Spark Power is celebrating their first birthday by giving all their customers a free day of electricity.

“I was sick of the terrible service, I was sick of not being able to speak to one person, in Australia, to help resolve my issues, I was sick of being enticed by a provider to use them with a ‘honeymoon’ offer and then not being given the best deal when the honeymoon was over, and I was sick of sending money overseas when I was paying for electricity instead of supporting fellow Australians,” Arran said.

Over a few beers, Arran voiced his frustrations to his mates – only to find that they too were facing similar issues.  After the BBQ was over the five mates all went away.  But the echoes of that conversation replaying in their heads did not.

They all saw the need for an Australian based, Australian owned electricity provider that put the power back in Aussie’s hands when it came to power.  Eventually each of them confessed their individual enquiries – and they were stunned to see that they all had been thinking the same way.  “It really was quite amazing,” Arran said.

As you can imagine, setting up an electricity company isn’t an easy exercise.  But the five mates – with backgrounds in telecommunications, banking, and finance – soon undertook the massive task and on May 5, 2020 Bright Spark Power was born.  Their only regret?  They didn’t do it sooner!

The name, Bright Spark Power, not only epitomises the organic ‘idea-popping’ moment that occurred at a BBQ get together, but it also reflects the company’s absolute commitment to do things better and smarter when it comes to electricity, in particular:

Collectively the backgrounds of the founders (aka the mates at the BBQ!)  meant that they’d seen all the tricks – the package pricing, how to use discounts, how to cap plans, small line items hiding behind other costs, fee schedules a mile long and so on and they thought they could do better… and they did! They created a customer-focussed energy company which has customer retention rates that are through the roof!

“Three of the four big energy retailers are wholly or partly foreign owned.  That’s not good for any Australians.  Most big energy companies have their call staff located off-shore – again not good for Australian jobs and often not very good for standards of service either.[1] The icing on the cake when it comes to not good for consumers is the fact that many companies don’t offer their best rate – until you go to leave them and then suddenly, they can do better.  We didn’t want the hassle (and potential waste of money) as consumers and as energy suppliers we didn’t want to make a company where we would play any part in this kind of behaviour,” Arran reveals.

Bright Spark Power’s gift of a day’s free energy to all their customers on the company’s first birthday symbolizes their commitment to putting customers first.

“We want to reward our customers.  Loyalty and integrity are pillars of Aussie values.  That is part of what makes our country so great.  We want to celebrate this on our birthday and reward everyone who has been so loyal to us thus far – and we also want to make the promise to everyone – current and potential customers – that we aren’t going to change our ways.  We are in this for the long haul,” Arran said.

Now, more than ever, Arran and his mates believe that Australians need to support other Australians in their endeavours, that too much manufacturing and industry has gone offshore and that the tide needs to change.  Switching to Bright Spark Power is one way that Aussies can help make a difference – and, with an ethos to always puts customers first, it’s clear that they won’t be disappointed.