The Woy Woy area (including Ettalong, Umina, Ocean Beach and Koolewong) is a popular holiday and retirement destination on the Central Coast north of Sydney and is the largest of a number of settlements around the western foreshores of Brisbane Water. It can be accessed easily from Sydney via the Newcastle Freeway, via Gosford.

Brisbane Water Drive runs off the Pacific Highway at West Gosford down to Woy Woy following south along the beautiful shoreline of Brisbane Water. 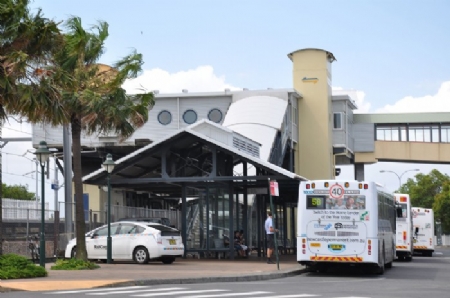 The last stop along Brisbane Water Drive before Woy Woy is Koolewong where a strip of parkland lies between the road and the ocean. There are picnic and playground facilities and a pedestrian walkway along the foreshore with a carpark, a deepwater boat ramp and a boat hire service.

Most of Woy Woy, Ettalong and Umina is on a large peninsula, called The Peninsula, jutting out from the mainland. The western edge of the peninsula is separated from the rest of the mainland by Woy Woy Inlet, one of the few flat areas of the Central Coast.

The mouth of the Hawkesbury River marks the western end of Broken Bay and the mouth of Pittwater is at the southern end.

Their proximity to Sydney and beautiful scenery makes all four bodies of water popular with holidaymakers. The warm summer weather provides endless opportunities for boating, swimming and fishing.

There is a waterfront reserve with boat ramps, picnic facilities, toilets, showers, a playground, tidal baths and formal gardens in War Memorial Park, out to the north-eastern edge of The Peninsula. The area is also well lit at night.

The first white settlers in the area were drawn by the abundant supplies of cedar, forest oak, blue gum and other hardwoods. Boatbuilding also began at this time and continued until World War I.

With no roads, contact with the outside world could only be made by boat, restricting settlement to the area alongside the shores of Brisbane Water and its inlets. Small settlers took up land on the ocean shores, growing maize, onions, potatoes and hay. Others gathered cockle shells which were loaded on to ketches and sent off for lime-burning.

The rugged terrain made the area a haven for smugglers, moonshiners, escapee convicts and ticket-of-leave men. 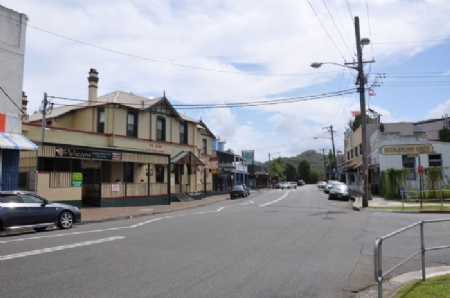 The first oyster lease was established around 1884, however the railway line in 1888 enabled rapid development of the town.

The Woy Woy Tunnel is the longest railway tunnel in NSW and was built for the occasion out of ten million bricks, shipped by Rock Davis of Blackwall to Brick Wharf, at the north-eastern tip of Woy Woy Peninsula. They were then transported along a rail line (now Brick Wharf Rd) to the construction camp.

The first store and post office and four temporary hotels opened to cater for the 800 workers building the tunnel.

Railway access enabled Woy Woy to became a fishing and tourist resort in the 1890s. Around this time the Central Coast started to become a primary tourism destination. Fishing was the main drawcard, although bathing and shooting were other attractions. 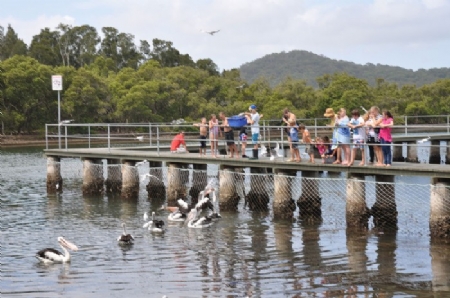 South of Ettalong is the residential area known as Umina, said to mean 'repose'.

Umina was established as a holiday resort town in 1917 connecting to Woy Woy train station by a motor service.

Immediately south of Ettalong Beach is Ocean Beach. At the end of The Esplanade is a play and picnic area, Umina Beach, a caravan park and a large recreation area. Further south are Mt Ettalong, Pearl Beach and Patonga .

What is known as the Guringgai and the etchings can be seen by following a pathway around the circumference of the site, situated north west of Woy Woy and south of Kariong. The figures are of men, women, marine life, kangaroos and canoes. It is not known to what extent they form a narrative or to what extent they are pedagogical or of ceremonial significance (or all three). Theories suggest they started as a charcoal or scratched outline that was then made permanent by 'pecking' holes along the outline with a pointed stone with the area between the holes later rubbed away. While surviving as a good example of early aboriginal significance, erosion has taken its toll and the figures are sometimes indistinct, though the information boards are helpful in providing clarity. The engravings are clearest at dawn or dusk or after rain.