Toukley and surrounding areas is a large expanding residential and holiday resort area at the northern end of the Central Coast. 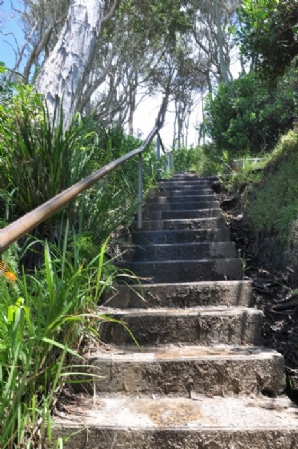 Tuggerah Lake is the principal coastal lagoon of an interconnected 80 sq km lake system that includes Lake Munmorah and Budgewoi Lake. Large sand peninsulas separate the three lagoons from the Pacific Ocean, but they share common access to the ocean at The Entrance. The lakes and foreshores were cleaned up and restored in the late 1980s and are now ideal for waterskiing, canoeing, sailing, rowing and sailboarding.

The lakes are also ideal for anglers with blackfish, whiting, mullet, snapper, bream, flounder, tailor, flathead, jewfish, tarwhine and crabs all able to be caught from the foreshores of Tuggerah lake and Bream mostly caught in Budgewoi Lake. Prawns are usually plentiful in mid-summer and can be caught by wading into the shallows at night with the traditional lamp and net.

Cabbage Tree Harbour, Hargraves Beach, Jenny Dixon Beach and Norah Head are among the smaller but very popular locations to visit. Cabbage Tree Harbour is an attractive little bay enclosed by small rocky cliffs on either side that face northwards up the coastline. There’s a boat ramp and ocean pool and a few houses on the hillside.

Norah Head Lighthouse was built in 1903 and is considered one of the major coastal lights in NSW with the beam being seen 28km out to sea.

The viewing area around the lighthouse offers an excellent perspective over the coastline, lakes and westwards to the mountains.

Below the lighthouse and off each of the headlands to the immediate south are enormous rock platforms, ideal for catching salmon, drummer, tailor, jewfish and snapper.

Soldiers Point is an expansive, grassy headland where there are visitor’s conveniences and views down over Pebbley Beach on the northern side and to Soldiers Beach to the south, a major surfing beach in the area. The view southwards from the point is extensive, from The Entrance to First Point (south of Avoca Beach) and on to Barrenjoey Head at the tip of the Sydney beaches.

The ocean side is mostly coastal dunes with beach access via Pelican Beach Rd and the Tuggerah Beach Walking Track that leads to a popular but unpatrolled surfing and fishing area.

Remnants of littoral rainforest and some open scrubland and wetlands behind a strip of red gum forest can be explored by following colour-coded walking tracks, accessed from the western side of Barrett Drive. The wetlands trail extends northwards to the rim of the main sand dune. 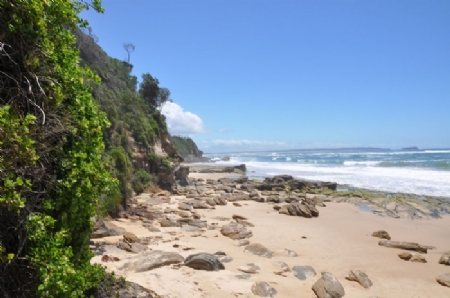 Budgewoi (meaning 'young grass') is 3 km north of Noraville and occupies two small portions of land marking the boundary between Budgewoi Lake and Lake Munmorah. The two almost meet leaving only a narrow channel with boat ramps on opposite sides of the channel.

A large reserve with lots of trees, picnic-barbecue facilities and a footbridge across to a tiny island are a popular feature of the area. The waters of the channel are calm and shallow making this a popular and ideal spot for family outings and anglers. There are also clear views northwards over Lake Munmorah.

Another popular and well-maintained spot with excellent facilities enclosed by coastal tea tree is Birdie Beach. Its remoteness and scarcity of large numbers of visitors gives it a secluded feel. It’s a short walk to this remote, scenic and lengthy beach.

Red Ochre Beach at the northernmost end is open to nude bathing.

There are walking tracks leading north to Frazer Beach and south to Birdie Beach Lookout. There are also excellent perspectives looking down over Wybung Head north and along the immediate coastline into beautiful, sequestered Frazer Beach, with Snapper Point at its northern end and Flat Rocks Pt.

The dramatic rock forms at Wybung Head are the product of years of jolting, warping, erosion and ruptures of a surface formed in part by the sedimentation deposited by a river that ran from the mountains in the west and which had its estuary at this location. The Palms Picnic Area and an excellent loop track through a section of littoral rainforest and open eucalypt forest are ideal family recreational locations. The road also leads to Frazer Beach, well known for its surfing and fishing. There is a walking track north to tiny Timber Beach on the other side of Bongon Head. 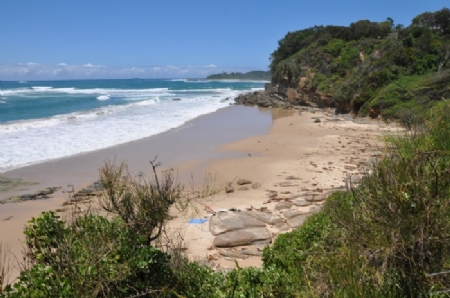 Another spot for a picnic is Osborne Park, not far from Toukley Golf Course, with a playground and boat ramp on the shore of Budgewoi Lake.

The eastern end of Toukley along the ocean shore is known as Noraville, named after Noraville House, built by Edward Hargraves, the prospector who, in 1851, discovered the first payable gold in Australia.

Hargraves was attracted by the beauty of the district and bought 640 acres at Noraville in the 1850s. He built the home, a replica of his grandfather's residence in England and one of the first in the district, later in the decade. It still stands on the clifftop overlooking Hargraves Beach and the ocean below. Noraville House is located at 3 Elizabeth St (turn off Scenic Rd).

Hargraves' wife was the first white woman to live in the district and she tended the estate after his death.

The Toukley markets are held in Toukley Shopping Centre Carpark on Canton Beach Rd, every Sunday from 8-2.

The first Europeans to discover the lakes were a search party looking for some shipwrecked fisherman who landed on the coast in 1796.

Toukley emerged with the construction of the Sydney-Newcastle railway in the 1880s. A new emphasis on health and leisure in the culture brought visitors by boat, train and horse-drawn vehicle to the fishing, bathing and walking opportunities afforded by the lakes.

The name ‘Toukley’ is thought to have indigenous origin. Two very different theories are that 'toukley' means 'many brambles', or that 'toukley ouckley' means 'rough on one side, smooth on the other', interpreted as referring to Tuggerah Lake and Budgewoi Lake.