True to it's name, Pearl Beach is a 'Gem' located on the Western Shoreline, sharing the Peninsula with nearby Patonga. Residences have been constructed to blend with the local vegetation which, over the years, has been maintained mostly in its original pristine condition. The result is that the appearance to the visitor is one of bushland with houses, rather than the expected opposite.

The area is home or a weekend retreat for many of Sydney's media personalities. Pearl Beach also features a popular Ocean Rock Pool perfect for lap swimming.

Visitors to Pearl Beach can travel via various travel means and routes. By road from Sydney, driving north via the Sydney-Newcastle (F3) freeway, exiting at Gosford/Somersby turn-off via Kariong or West Gosford for Woy Woy. At Woy Woy proceed via Umina. By rail from Sydney, take Inter-City rail services from Central or Strathfield Stations to Woy Woy. Bus services operate from Woy Woy station via Umina. Taxis are also available from Woy Woy Station.

Mt Ettalong Lookout
At Umina, (Ocean Beach Road and West Street roundabout), follow the road around to the right (as it becomes Hobart Ave) and you will soon find yourself winding your way up Mt Ettalong - properly named, Mt Etymalong. Just 2.2 km from the Sydney Ave/Hobart Ave intersection is a hairpin bend where you will find Umina Lookout just off the road. There are views north up along Ocean Beach to Ettalong and Wagstaff and over Brisbane Water generally. 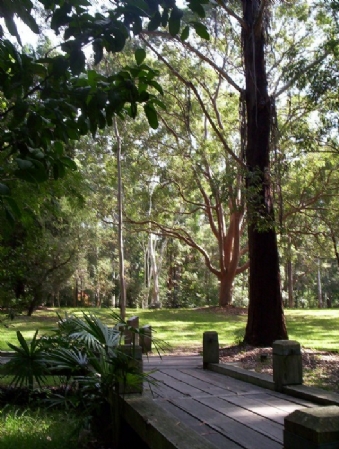 800m beyond this bend, there is a signposted turnoff to the left which will take you to the Mt Ettalong lookouts, which are the finest on the entire western shore of Brisbane Water. At the water reservoir, park your car and walk up along the dirt track.

Probably the best view to be had is by just walking immediately east (slightly to your right) about a third of the way along the track.  It is sign posted and will lead you straight over to the cliff face. Immediately below is beautiful Pearl Beach. Beyond that it is easy to see Green Point at its southern end, then a desultory strip of beach. South of that, the land ends at the estuary of the Hawkesbury which lies at the western end of Broken Bay. The views over the bay, usually dotted with white sails, are excellent. Lion Island lies in the middle. The land to the far left with the lighthouse is Barrenjoey Head. Around the corner facing out to the ocean is Palm Beach, the most northerly of Sydney's northern beaches. Just to the right of Barrenjoey is a large inlet which recedes southwards known as Pittwater. To the right of that is West Head on the north-eastern corner of Ku-Ring-Gai Chase National Park which follows the southern shore of the Hawkesbury River as it disappears around the corner to the far right. Looking straight across Brisbane Water is Box Head at the southern tip of the western shore.

Note the unusual honeycombed weathering of the sandstone at the lookout, caused largely by wind-blown sand particles.

The official lookouts lie to the north of the carpark. Just follow the signs. It is a very short distance. The northernmost lookout faces northwards up Ocean Beach to Ettalong and Wagstaffe. From here the shallowness of Brisbane Water is apparent from the shoals and sandbars over which the waves break offshore. To the east is Box Head and the Bouddi National Park. A directional plate indicates various locations in the distance and how far away they are.

Pearl Beach
Return to the main road (Patonga Drive) and turn left. It is only about 200m to the turnoff into Pearl Beach Rd on the left. This winds its way down the mountainside. Turn right, at the Give-way sign, into Diamond Road. Any of the next three lefts will take you to Pearl Parade by the waterfront where there is a reserve, a picnic and barbecue area, a children's playground and tidal baths.

People visit Pearl Beach primarily to get away from it all. The beach is pleasant, relatively quiet and good for swimming. The nearby restaurants offer good food often with great views across the water.

Crommelin Arboretum
At the end of Diamond Rd turn right into Crystal Ave. Along this road, to the right, is the parking area for Crommelin Native Arboretum, a truly lovely 4.5-ha flora sanctuary with grassed areas, wetlands, patches of temperate rainforest and open forest crisscrossed by very easy walking trails. This is one of the more pleasant attractions of the area. 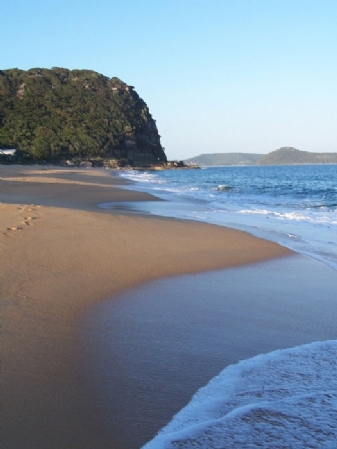 Green Point
Return along Crystal Ave and proceed past Diamond Rd out to Green Point where you will find Paul Landa Reserve, another pleasant spot for a stroll down to a rock ledge over the point.

Warrah Lookout
Return to the top of Pearl Beach Drive and take the sharp left into Patonga Drive. About 2.3 km from the Mt Ettalong Lookout a branch road to the left which will take you 1.2 km along a dirt road to Warrah Trig. The enjoyable Tony Doyle Walking Trail leads to a lookout directly out over Broken Bay 200m below. There are some colourful wildflowers from July to October and Christmas bells. Just near the lookout the Doyle Track crosses over a dirt road. For the enthusiastic walker a left will take you back to Pearl Beach and a right to Patonga.

It is recorded that Pearl Beach (believed to have been officially named in 1921) was first visited on the 2nd March, 1792 when Governor Arthur Phillip made an expedition by water to inspect land in the large bay (so named Broken Bay after the broken appearance of the surrounding land) mentioned in the chronicles of Captain James Cook.

Landfall was not made by Capt. Phillip's expedition, as although the natives appeared friendly, their numbers discouraged him and that night slept in their long boat.

It is popularly believed that in 1928, a Mr Clive Staples developed and subdivided the area and offered the land for sale as the "Pearl Beach Estate". Almost all of the village streets are named after a gem stone.