Easily accessed via a short drive off the Newcastle-Sydney F3 freeway, or a centrally located train station, Gosford is the major commercial and administrative centre of the Central Coast. The Gosford Local Government Area (LGA) has a population of 158,157 as at the 2006 Census.

The Gosford Visitor Information Centre in Mann Street is an ideal place to start your Central Coast visit with a good selection of visitor guides, maps, books and tour suggestions.

Gosford is surrounded by dozens of popular hideaway holiday locations making it a conveniently central starting point for visitors to the region.

Spectacular ocean beaches and evergreen bushland and forests line the coast, with the mild climate offering comfortable surrounds all year round.

The Bluetongue Stadium, which can hold around 20,000 spectators, offers a unqiue multifunctional facility and is home to the Central Coast Mariners.

Inland, steep hills and valleys with extensive state forests and lakes offer numerous options for visitors to relax and unwind. Rumbalara and Katandra Reserves, featuring exceptional bushland adjacent to the heart of Gosford, are the town’s most popular major attractions. Rumbalara has eight varying walking trails, where you can view an early aboriginal rock shelter, westward viewing lookout, bronze sculptures of early explorers and pioneers, and some remnant rainforests.

Katandra, boasts more striking and distinctive cliffs, with the easy-going and popular Waterman Walk circling the Seymour Pond offering dramatic environments from pleasant forest to dense canopy. A number of walks take you through the reserve and up to lookouts that offer spectacular panoramic views across the coastal valleys to the ocean.

Brisbane Water National Park covers most of the land between Brisbane Water and the freeway. There are numerous walks through open woodland and well-established pockets of subtropical rainforest in the steep sandstone gorges. Tree ferns, cabbage tree palms, elkhorns, rock orchids, wildflowers, mangroves, Australian native animals and birdlife thrive in the park, where you will find unlimited fishing and photographic opportunities, picnic-barbecue and recreational areas.

The Bulgandry Aboriginal Engravings site is located within the park, with easy access walkways and good information boards. The engravings are best viewed at dawn or dusk or after rain.

Carawah Reserve is an estuarine wetland with an elevated boardwalk through salt marshes, swamp forests, mudflats, mangroves and seagrasses. Information boards describe the nature of the vegetation and particular environment.

Great North Walk, a 250km trek from Newcastle to Sydney, passes through the area west of Gosford. The walk generally takes around 14 days, and features a wide range of  environments and attractions.

The Gosford Regional Art Gallery & Arts Centre, opened at Caroline Bay, East Gosford in 1999, is situated in parkland with a walking track leading to Central Coast Potter’s Society. Featuring the beautiful Japanese garden with a pond full of large bright koi, created by sister Japanese city Edogowa. An ideal environment and location for art lovers. The centre includes a 420 sq metre gallery built to conservation standards, and offers opportunities to the community for a diverse range of activities such as weddings, meetings, functions and business conferences.

One of the very few historical remnants still remaining is the Old Courthouse, the oldest recorded public building on The Central Coast and is now home to the Central Coast Music Conservatorium. Built in 1848-49 of local sandstone, it replaced the original 1827 watch-house.

Pioneer Park contains a number of historic gravestones, a picnic and playground area, and an excellent view of the Brisbane Water. Wyoming Cottage at Wyoming Road was built in 1842. There have been a number of extensions over the years but the basic original structure remains intact. The design for the cottage was commissioned in 1832 and the foundation stone laid in 1836.

Henry Kendall cottage was temporarily home to, and named after, one of Australia’s most famous colonial poets. Located in Henry Kendall Street West Gosford, the sandstone home was built between 1836 and 1840. It was originally licensed as the Red Cow Inn and is situated in a hectare of pleasant parkland and picnic grounds. The cottage is restored and houses a museum retaining a few of Kendall’s possessions. Displays include items of local history and antiquated agricultural items.

Brisbane Water, as it is known now, the predominant harbour area around the western side of Gosford, was the home of the coastal Guringai (Ku-ring-gai) people, occupying an area from the northern side of Sydney Harbour along the coast to the lower reaches of Lake Macquarie. The Darkingung people occupied the area west of Mangrove Creek to Rylstone, north to Cessnock and the Wollombi areas. Mt. Yengo, in the Darkingung country, remains a highly significant cultural and religious site to local tribes.

Governor Arthur Phillip and a small group of officers and marines made a brief exploration of Broken Bay and a tributary called the "north-east arm" in 1788, after establishing the settlement at Sydney Cove just five weeks before. Phillip made a further exploration in 1789 and this tributary subsequently came to be called "Brisbane Water".

The first known white settlers to the area took up land on the ocean shores in the 1820’s with varying agricultural and ocean based enterprises.

The original Gosford watch-house was built in Donnison Street in 1827. It was a three-roomed shingle-roofed slab timber structure that quickly became inadequate for its purpose. Around 1833 the first Gosford courthouse was added. The first Police Magistrate, Willoughby Bean was appointed in 1826.

The first township was established at East Gosford by Samuel Peek in the 1830’s, with a government township originally known as the Township at Point Frederick being surveyed and established between Narara and Erina Creeks.

Governor Gipps named the town of Gosford in 1839. It is believed to have been named after Archibald Acheson, the 2nd Earl of Gosford.

Local Government commenced in 1843 with the constitution of The District Council of Brisbane Water. This Council had limited funds, resources and powers, and dissolved in 1859. 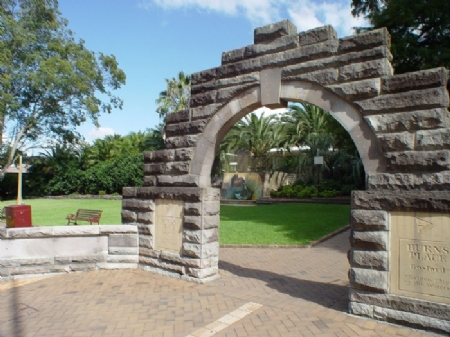 Tourism in the region began in the 1880’s with the completion of the Sydney to Newcastle railway and a new focus on health and leisure.  A significant section of the railway was the opening of the original Hawkesbury River Bridge in 1889. This bridge was heralded as the last link in uniting the eastern states by rail, and became a rallying point for Federation.

The Church of England was erected at East Gosford in 1858. In 1906 Christ Church was moved stone-by-stone to Mann Street south, Gosford, where it stands today as St. Mary's.