The small communities of Brooklyn and Dangar Island are located in the lower estuarine reaches of the Hawkesbury-Nepean River with neighbouring Hawkesbury region.

Brooklyn is a small riverside settlement occupying the narrow strip of land on the southern shore of the Hawkesbury River between the river's southern bank and the extensive and attractive bushland to the south (Ku-Ring-Gai Chase National Park) and west (Muogamarra Nature Reserve). 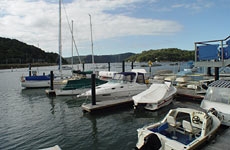 Brooklyn is a popular tourist venue for both its natural setting and its access to the Hawkesbury River via marinas, wharfs and boat ramps, and some industrial properties in the boating and fishing industries.

Just offshore, running parallel to Brooklyn's east-west span and equally narrow, is Long Island, a nature reserve with the train line bisecting its western edge as the only major development .

Dangar Island is located off Flat Rock Pt, approximately 500 metres north-east of Brooklyn's north-eastern tip, on the Hawkesbury River . The Island is approximately 0.3 square kilometres in area and although only accessible by water, has a jetty, wharf, post office, general store, some roads and a reserve with Aboriginal rock carvings. 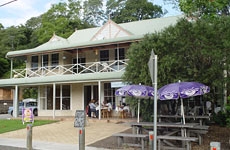 The communities of Mooney Mooney, Cheero Point and Little Wobby are located on the Hawkesbury River estuary in close proximity to Brooklyn and Dangar Island within the Central Coast region.

Boating is a major drawcard to the area with numerous houseboats, hire boats, ferries, water taxis, boat ramps and marinas. One of the boat ramps is located at Kangaroo Point, on the south-eastern side of the bridge (the access road departs from the highway just beyond Brooklyn Rd ).

McKell Park at the north-eastern tip of the Brooklyn settlement has wharves, two slipways, a chandlery, holiday apartments, a restaurant, a water taxi service, a ferry service, a handicrafts shop, a cafe, bottle shop, deli, laundromat and hire-boat outlet. 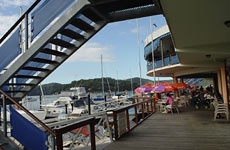 Local wharves are the launching point for Australia's last riverboat mail and groceries delivery service along the Hawkesbury, a reminder of the days when the Hawkesbury River connected the farming communities inland to the settlement at Sydney which relied upon their supplies. There are regular passenger ferry services to Patonga.

The Dangar Island Ferry Service also operates at regular intervals on a daily basis and, in addition to providing access to the offshore island there are 2.5-hour cruises of the waterways for groups of 20 or more, with historical commentary, and charters for special functions.

Brooklyn is on the route of the 250-km Great North Walk from Sydney to Newcastle, a 14-day walk taking in a wide range of environments and attractions, both natural and man-made.

White settlement began when Governor Phillip and party sailed past the mouth of Brisbane Water and entered Broken Bay in a whaleboat as early as March 1788. The party camped on Dangar Island, which Phillip named Mullet Island after making a substantial catch offshore. 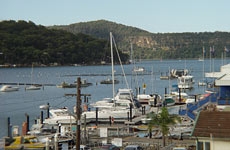 The railway in 1877 made it less than an hour's journey from Hornsby. A ferry service then conveyed passengers to Gosford.

Brooklyn was created in 1884 when the Fagan Brothers subdivided their 100-acre grant. The township was apparently named after a town in Holland called Breucklen. America's Union Bridge Company built the first railway bridge across the Hawkesbury River in 1889.

By the early twentieth century the Hawkesbury River had become a major tourist attraction and Brooklyn soon became heavily reliant on the tourism industry. Visitors travelled upriver in fishing boats leading to the development of the prawning industry, particularly as it was outlawed in Brisbane Water.