Ian Hemphill can’t remember when herbs and spices were not a part of his life. The younger son of John and Rosemary Hemphill, who pioneered Australia’s love of herbs and spices in the 1950’s, Ian earned his pocket money picking herbs and remembers many a season when the family home was strewn with bunches of drying culinary produce. Ian & Liz met at NIDA and married in 1970. Upon realising that herbs and spices were more interesting than acting, Ian worked with his parents for many years, and while their three daughters were growing up Liz worked in the Somerset Cottage shop in Dural. In the early 1970’s, Liz’s book, Your First Book of Herb Gardening was published by Angus & Robertson as part of a series for children and adolescents.  During the mid 1980’s Ian managed a spice company in Singapore before becoming a senior manager for a multinational food company in Australia in the 1990’s. In 1997 Ian and Liz opened the specialty spice business, which naturally was named after the nickname Ian had since school days,…..Herbie’s. Herbie’s Spices was founded to fill a need in the community of cooks and food lovers who wanted to access hard-to-find herbs and spices, have access to reliable information and be assured of the very best quality available in the world.  Herbie and Liz have been manufacturing on the Central Coast for the last 17 years, and now have factory door sales at their Spicery in Charmhaven, where they are now enjoying sharing their extensive knowledge and experience with food lovers.

Herbie explains the best way to store your herbs and spices
>Website !phone 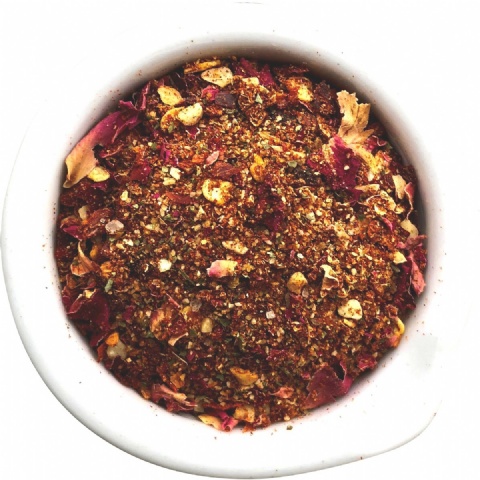 Based on a Tunisian blend that may be rubbed on food before cooking, or made into a fragrant, spicy paste. (SML PKT) Contains: Red Chilli Flakes, Garlic, Mild Paprika, Rose Petals, Caraway Seed, Coriander Seed, Smoked Sweet Paprika, Cumin, Sea Salt, Mint. Description & Use: Rose Harissa is fragrant and not quite as hot as the fiery traditional Tunisian Harissa paste, made predominantly from red-hot chillies and used as an accompaniment to a wide variety of foods, in much the same way as the Italians use pestou, the Asians chilli sauce and the Indians their lime pickles.